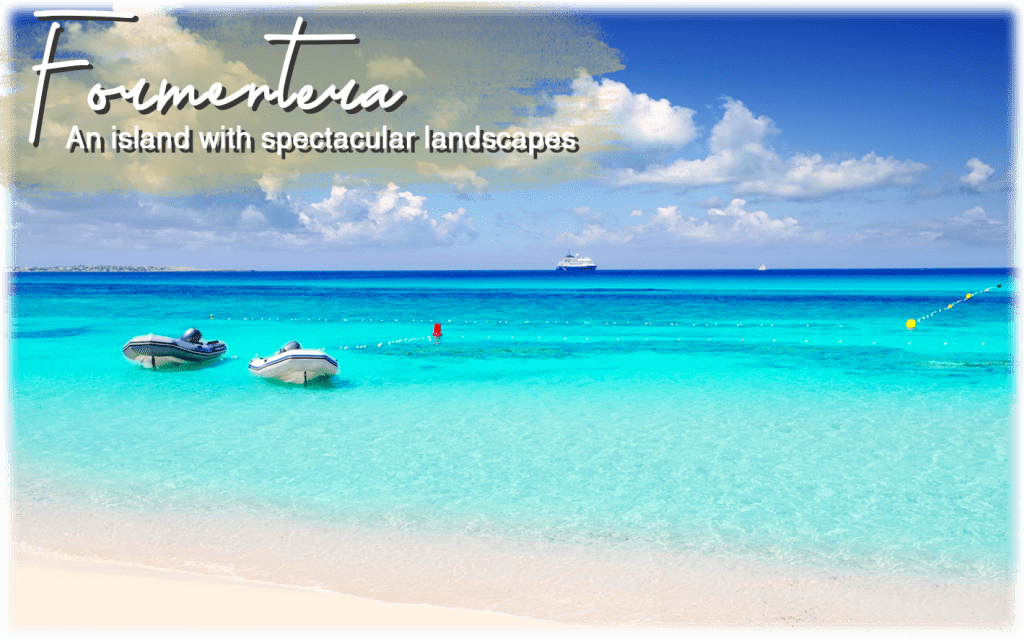 Formentera is a Spanish island located in the Mediterranean Sea and a municipality that forms part, together with Mallorca, Menorca and Ibiza, of the autonomous community of the Balearic Islands.

In addition, together with Ibiza and several islets, it forms the so-called Pitiusas Islands. It should be noted that in 2019 it had a population of 12,111 inhabitants, making it the least populated Balearic island. However, Formentera is the fourth largest in the Balearic archipelago and this makes it important for tourists due to its crystal clear waters.

This fascinating island has 69 km of coastline, full of beaches and cliffs of great beauty. It is a very flat island. The climate is mild, with an average annual temperature of 18.6 degrees Celsius and an average of 2,883 hours of sunshine per year. Therefore, its Mediterranean-type vegetation combines dune areas with pine, juniper and scrub forests.

It is impossible not to highlight the beaches for their natural beauty, since they have more sand and less waves. The quietest and most hidden coves are those on the island of Espalmador and the stretches. In addition to the nudist beaches, they are on the island of Espalmador, in Levante and Caló d’Es Mort, although nudism is widespread and it is very normal to find people who practice it mixed with others who are not on all the beaches.

For all travelers, wherever they go, the priority is to have a good time during their vacations and for this there are many options, among them the Gecko Hotel & Beach Club is one of the best options.

Those who want to do an activity can go to Cala en Baster Beach and Ses Platgetes Beach, while those who want to appreciate the natural beauty of the area can visit Ses Salines Natural Park and Migjorn Beach, this beach club is perfect to start those adventures. Gecko Hotel & Beach Club is located on the beach of Formentera.

Gecko Hotel & Beach Club on the magical island of Formentera offers an experience of going back to the past, reviving all the summer glamor of the jet-set in the 50’s and respecting the protected environment that surrounds it.

This place will be an innovative experience that unites our passion for the island, the beach lifestyle and the elegance of an era that is left behind, but that we honor with its essence.

It is a place where you can do yoga by the sea, and enjoy gardens, surrounded by centuries-old junipers and with access to one of the legendary beaches of Formentera, making Gecko Beach Club the perfect place to appreciate any type of event. would you like to see in Gecko Beach? The perfect time to start planning is now. 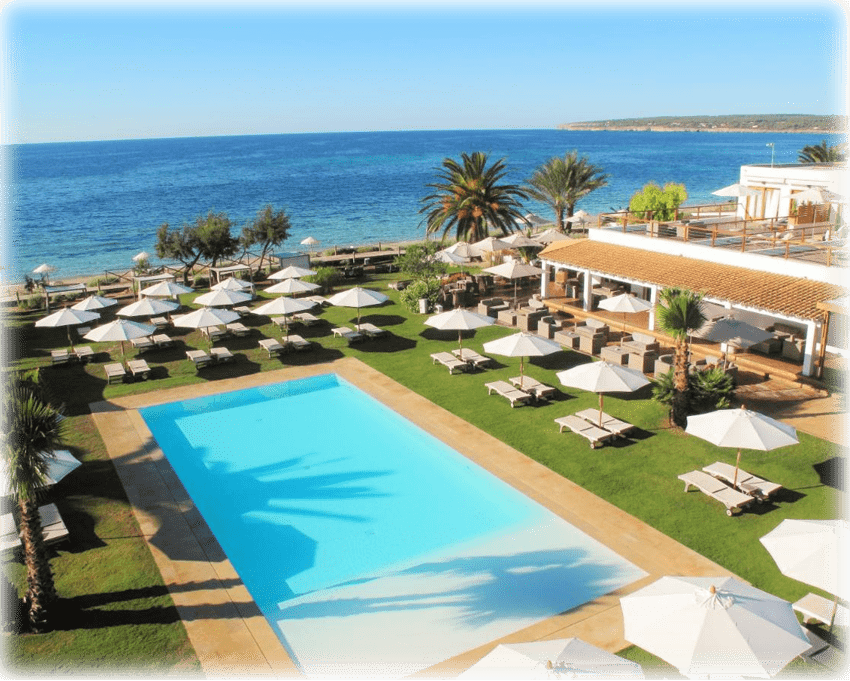 When looking for a pleasant and outstanding place to stay, there are plenty of good options, and among all of these, the Hotel Riu La Mola is one of the most outstanding. 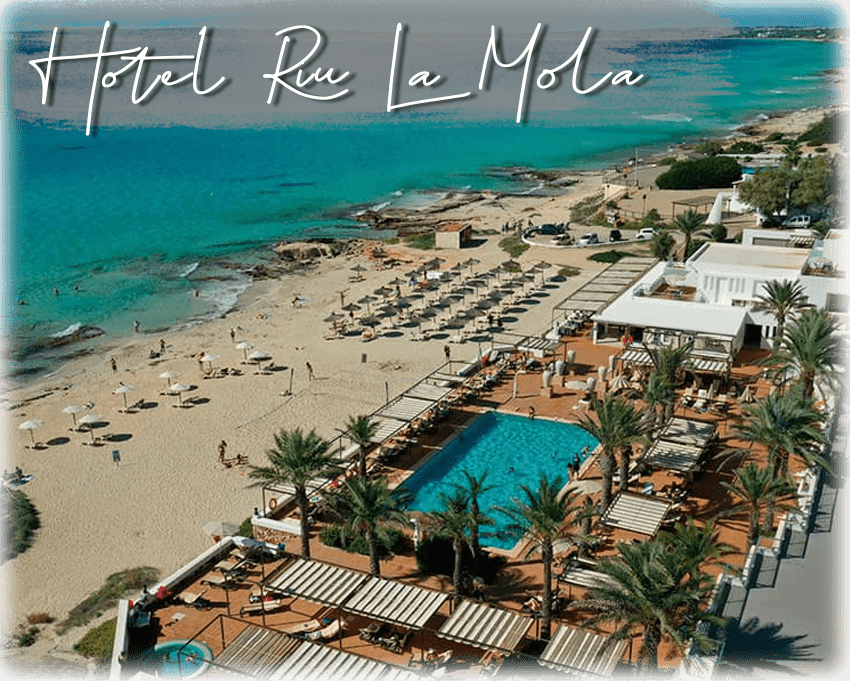 The complete facilities of the Hotel Riu La Mola are surrounded by exuberant gardens and magnificent views, as well as being in an enclave where you can enjoy numerous restaurants and other attractions.

This large hotel has almost 350 rooms, 2 outdoor pools, including a baby pool, something unusual on the island. You can enjoy holidays with your family, couple or individually, as all combinations have a place in the accommodation.

The little ones have a dedicated space for them at the Riu Land Kids Club (from 4 to 12 years old) and the older ones a daytime entertainment space, 3 bars and show cooking in the main restaurant, and a magnificent chill -out terrace out for nightlife.

Athletes will be able to stay in shape as the hotel offers a gym in its facilities and the possibility of relaxing afterwards in the complex’s spa.

As usual in accommodation on the island, the hotel has free Wi -Fi , to which must be added a free parking for customers. Users highlight the good location, cleanliness and variety of services, as well as a good value for money.

It is a perfect hotel to enjoy your stay in Formentera, where you can relax and be satisfied with its spacious and comfortable facilities for that great trip.

Cap de Barbaria Lighthouse is a moment that you will live to the fullest, it is located at the southernmost point of the island, on an 80-meter cliff, it is another of the most beautiful places to see in Formentera and that you will feel part of you.

To get to this idyllic lighthouse you will have to travel along a narrow road surrounded by a completely arid landscape and the sea in the background, which has become one of the most Instagrammed images of the island.

In addition to being one of the busiest spots on the island to see one of the best sunsets over the Mediterranean Sea, this lighthouse became even more famous when it appeared in the movie “Lucía y el sexo”

Cap de Barbaria Lighthouse is a moment that you will live to the fullest, it is located at the southernmost point of the island, on an 80-meter cliff, it is another of the most beautiful places to see in Formentera and that you will feel part of you. 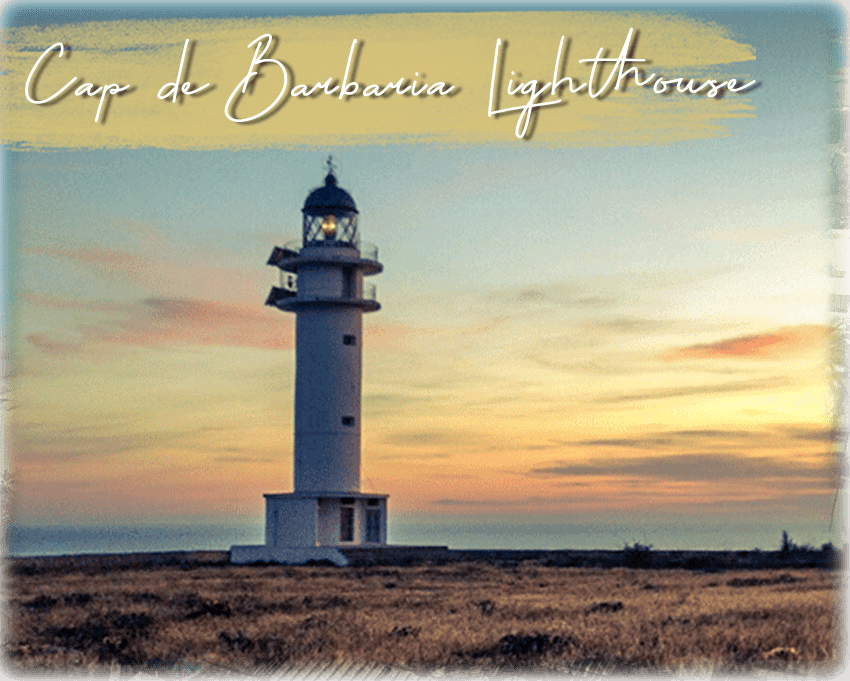 To get to this idyllic lighthouse you will have to travel along a narrow road surrounded by a completely arid landscape and the sea in the background, which has become one of the most Instagrammed images of the island.

In addition to being one of the busiest spots on the island to see one of the best sunsets over the Mediterranean Sea, this lighthouse became even more famous when it appeared in the movie “Lucía y el sexo”.

Near this point is the Cova Foradada , an incredible cave that ends with a terrace facing the sea, while if you go a little further you will reach the Es Garroveret defensive tower , one of the five towers that were erected on the island to spot any pirate ship.

The tourist places of Formentera are immense, without a doubt a great variety of places to share and enjoy its nature, unforgettable and full of the best energy. 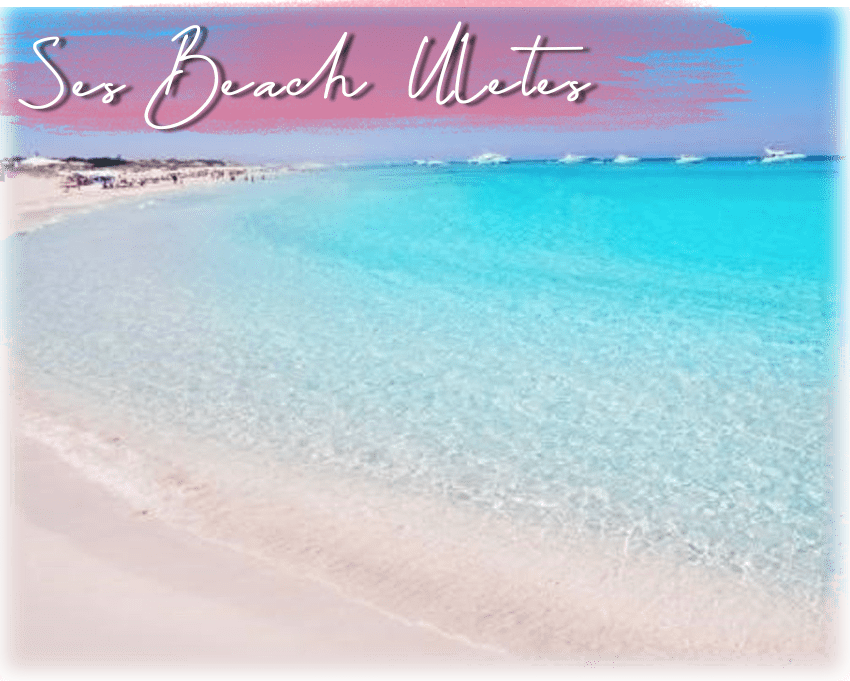 Ses Illetes , is located at the northernmost point of the island and another of the essential beaches to visit in Formentera.

This almost 500-meter-long beach, in addition to being the busiest on the island, is on several lists of the most beautiful in the world, thanks to its transparent and shallow turquoise waters that contrast with the pink color, a product of the mixture of white sand with coral remains.

In addition, in this tongue of sand you have all the services and several beach bars 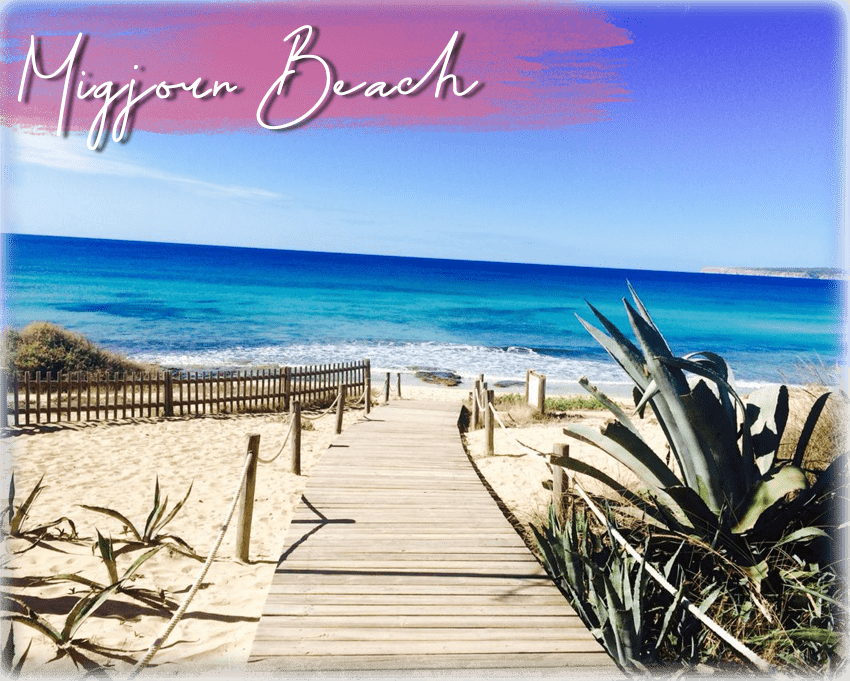 Another of the best things to do in Formentera is to take a bath in the crystal clear waters of Playa Migjorn, the largest on the island with more than 4 kilometers in length.

This beach, which has the advantage of its extension that prevents it from getting crowded, is perfect for long walks along the seashore and on a wooden platform enjoying the sea breeze and nature. In addition, its crystal clear waters and its seabed, rich in fish, will invite you to snorkel or dive. A good option to get started in the world of diving is to book this diving baptism. 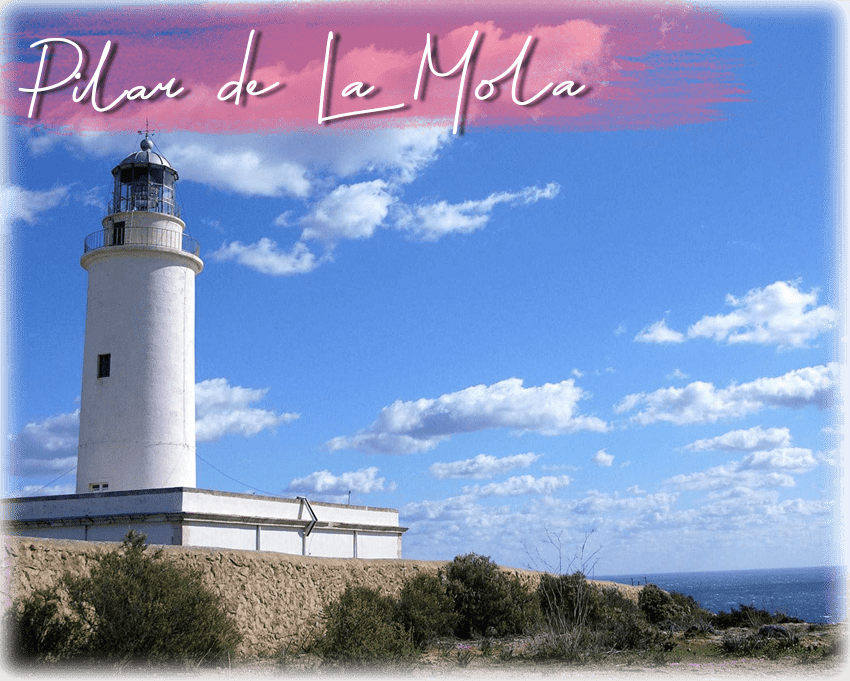 Going shopping at one of the hippie markets on the island is another of the best things to do in Formentera. The most famous is in the small town of Pilar de la Mola, which was peacefully invaded by the hippie movement of the 60s and 70s, remaining as a reminder of this time of peace and love. In this market you can find all kinds of jewelry, bags, bracelets, t-shirts, ceramics, sold by local artisans. This small town is also famous for the Molí Vell , an old windmill that was used to grind wheat and is the best preserved of the 7 that remain on the island. A little further away is the Faro de la Mola, located on a 120-meter cliff and another of the most beautiful places to visit in Formentera. To eat, near this area, good dishes of paella, fish and seafood you have the S’Eufabi restaurant .

No trip or adventure is complete without getting to know the nightlife of the visited destination, in the area of Formentera you can get to know a great variety of these places.

It is one of the favorite places to enjoy a perfect sunset because it has stands so you can sit and marvel at this natural event. In addition, it is also a perfect place to have a few glasses of champagne and you can dance under the moonlight as they schedule DJ sessions every summer night until 2 or 3 in the morning. If you are a lover of parties and of enjoying until long hours of the night, Blue Bar Formentera is a great option that you cannot ignore, it is a sensational place to share and have a good time with your friends and even with the tourists who visit this spectacular nighttime entertainment space. 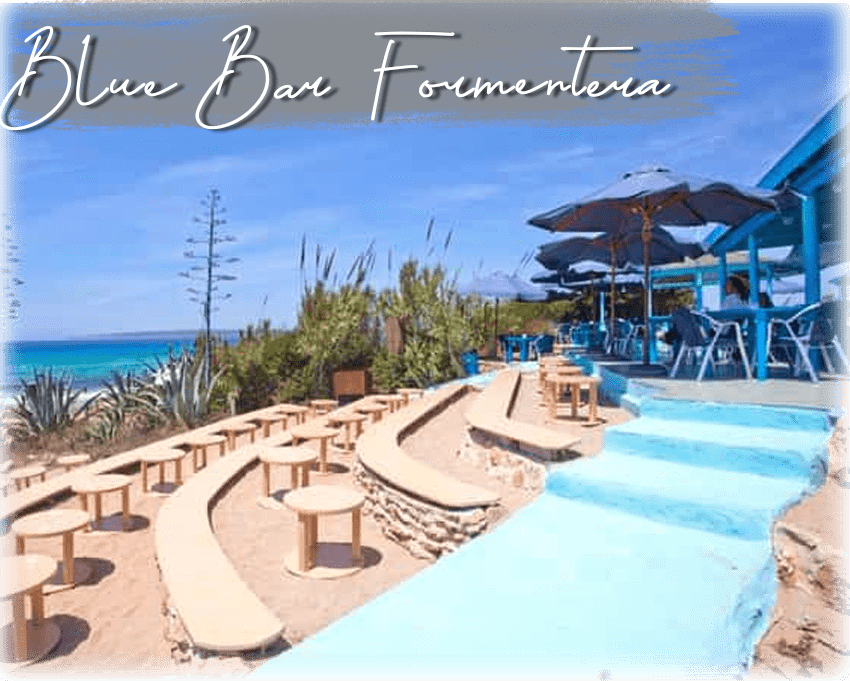 Formentera is an island full of light, a destination with a mild climate that has more than 2,800 hours of sunshine per year that allow you to enjoy its wonderful natural environment and its beautiful beaches. It is a fantastic island to visit and get to know every corner that they offer for the fun of tourists. Despite its quiet, secluded charm, you’ll also find some modern delights. Various places serve cocktails and cold drinks along the coast, and there are also romantic restaurants where you can share magical sunsets. Without a doubt, this island will make you enjoy great things that you will never forget, if it is in your options to visit, do not think twice.