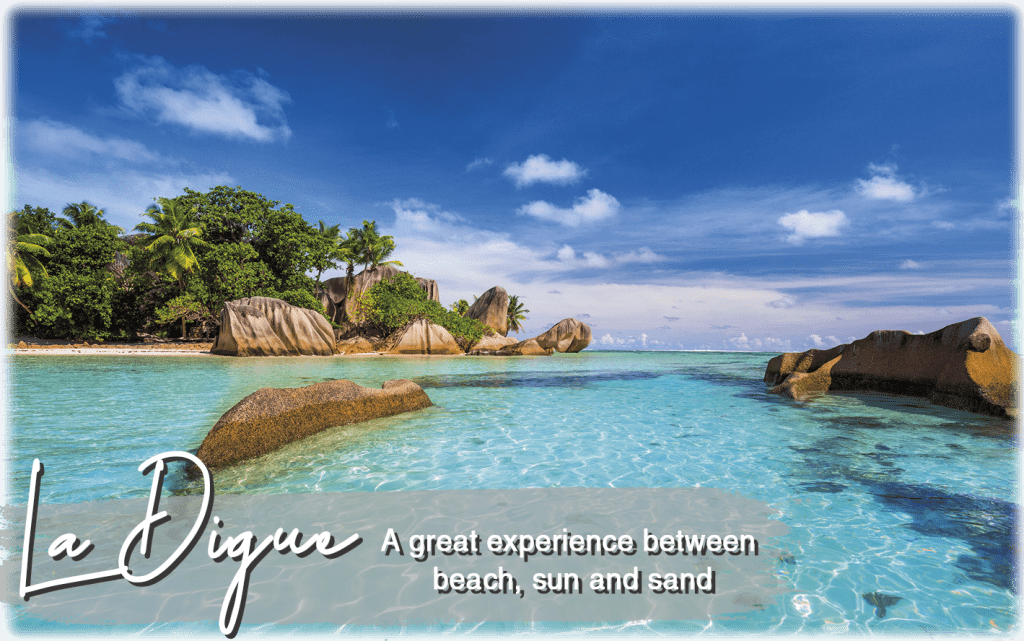 Seychelles is a country that is located on the African continent, it is made up of 115 islands, of which 33 are only inhabited. Which translates into a population of 90,000 inhabitants, at least from Africa.

Mahé and Praslin are very close to La Digue Island , it has good connections which makes it easy to enter the island, from Praslin you can get to La Digue Island in a short 15-minute ferry ride . For this there are two companies that provide the service, CatCocos and Inter Island Ferry. The frequency between the two is very high, so during the day there are many boats passing through.

Something important, La Digue Island and Mahé also have connections to each other, that is, the international airport is located in Mahé, so you will land there and easily reach La Digue without worries in 1 hour and 45 minutes with a stopover in Praslin.

This place has the appearance of a cabin, it transmits peace and tranquility to its guests, this means that you will have an excellent stay in the place and you will not have the desire to leave immediately.

You will be captivated by the beautiful pink flower garden and the excellent attention they provide on site. Guests are always looking for the beach, sun and sand, so here they have recreated a spectacular environment in which the pool is the main axis. Its crystal blue water and the brown color of the Beach Club make it stand out.

At the edge of the pool there are purple loungers, all arranged to offer you the best rest. In addition to a piña colada, beer or glass of wine, enjoy an excellent musical atmosphere here that will make you completely relax. 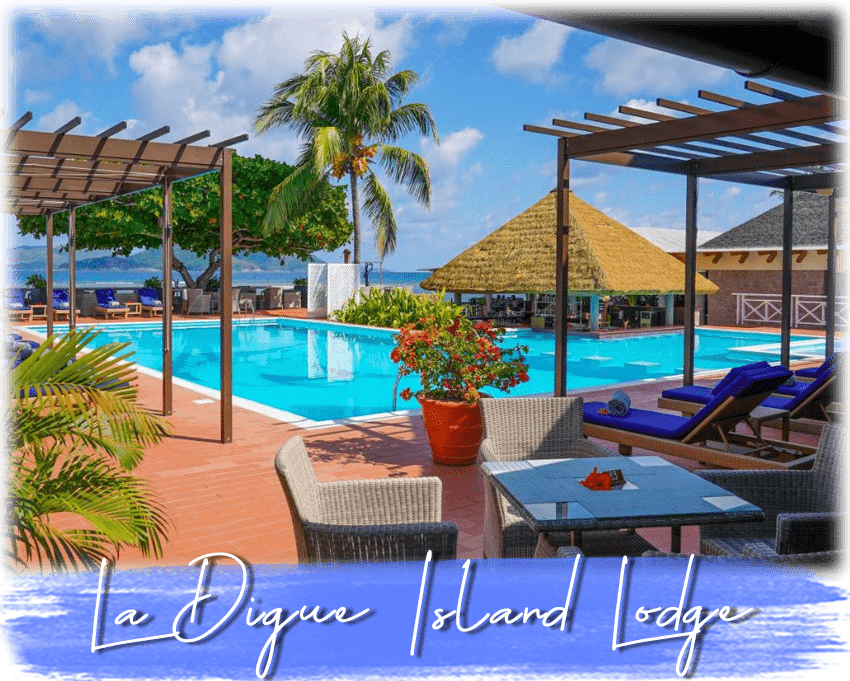 If you want something really natural, the beach is located a few meters from the Beach Club, there you can also rest on a deckchair while you enjoy your favorite drink and contemplate the sea, some decide to jump in, enjoy the water and then continue the fun from the deckchair.

The rooms are spectacular, full of luxury, comfort and a warm atmosphere that will make you feel at home. Beautiful beds with white sheets, lamps on the wall and ceiling, plus an amazing bathroom. The views from the rooms are wonderful, some facing the sea, others the pool.

Here you will also find an excellent restaurant, free parking, Wi-Fi access and the possibility of sports and recreational activities, including hiking, snorkeling, diving and fishing, all with cost included. What will come out for free is the bike ride.

During your stay at the hotel you can visit the famous beaches of the island of La Digue; Anse Patates, Anse Severe, Anse Source D’argent, Grand Anse, Petite Anse. These beaches can be reached on foot, by bicycle or by taxi.

The perfect place for guests traveling to the island of La Digue; Patatran Hotel offers a unique atmosphere of peace and tranquility. It is located in Anse Patates. 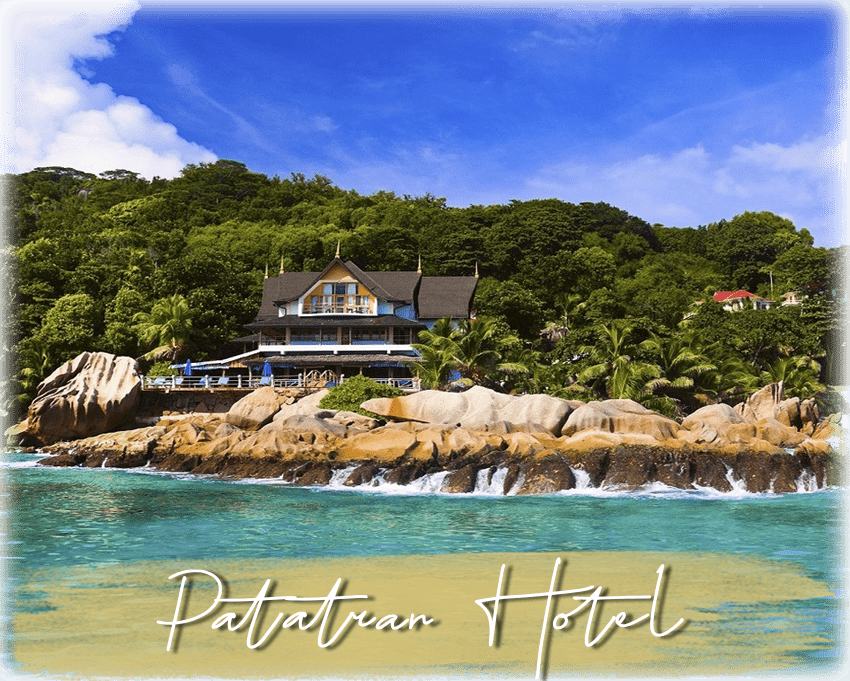 In Patatran Hotel the rooms have views of the sea and the pool, in addition to the excellent service in terms of beds and bathrooms, they have air conditioning, satellite television and in some cases balconies with sea views.

If it’s about eating, you won’t have to leave the hotel to taste a good dish because right there they have a restaurant service that offers its distinguished guests an extensive menu of dishes, which you can enjoy having an exquisite glass of wine with a heavenly view of the Indian Ocean.

You will have access to the barbecue area, shared lounge and satellite TV. Now, if you want access to the WiFi network, pay a supplement and enjoy browsing in complete freedom. Many guests have left positive comments about this area of the place.

To break the ice and go a little further, the hotel offers the service for recreational activities such as fishing or snorkeling. This is in high demand and sometimes makes people stay here much longer.

The airport is located on Praslin Island, a few minutes away if you take a ferry, getting there will be safe, fast and comfortable. This place is ideal for large groups of families or friends looking for good fun.

A ride from Mahé to La Digue, an adventure that will become the best experience you can have during your time in Seychelles. Do you dare to live this rewarding ride that will take you to explore the most beautiful destinations of La Digue?

The first thing you should do is take a ferry that will take you directly to La Digue, but be calm, before arriving you should enjoy the special tour that you will have aboard this maritime ship. Enjoy the best views of the nearest islands while heading to La Digue, have a good glass of wine, enjoy the sea and the breeze.

Upon arrival in La Digue they will give you a bicycle and ready, start touring this beautiful island. Make the most of your time because you will have 8 hours to explore everything you want and let yourself be captivated by its charm.

Some hotels only the selected ones have the vehicle service to go looking for the people who are staying in those places. On the way back they will also pick you up at the pier and leave you at the door of the hotel. 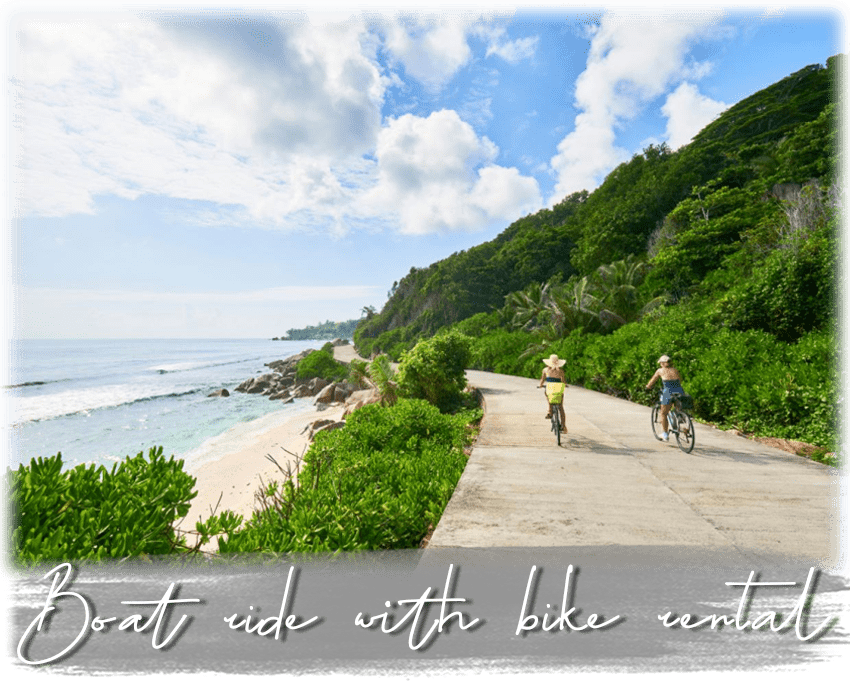 The interesting thing about this tour is that you can create your own itinerary, manage time as you please and go wherever you want. Of course, get to the vehicle on time so you don’t stay or cause a mishap. Enjoy but with conscience.

This tour does not include lunch or guide. They will give you a bottle of water, a map and bike rental for you to enjoy to the fullest.

The desire of each traveler is to be able to get to know every corner of and the entire area visited, in this case La Digue Island , has a lot to offer, including wonderful beaches and islands where you can get to explore everything you want. 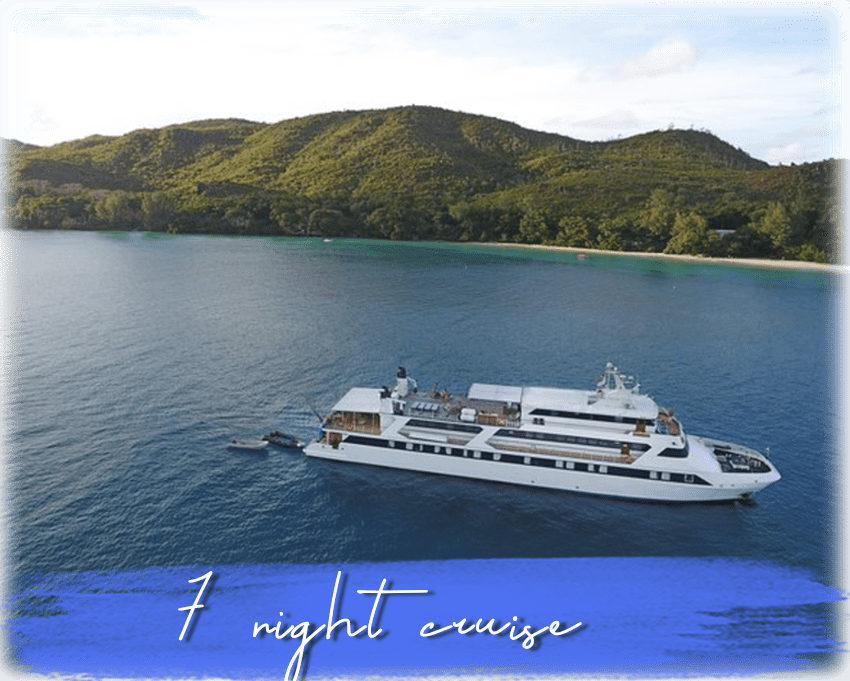 This wonderful yacht will offer you a fascinating adventure, you will go aboard 43 more passengers to complete the total capacity of the tour. Several renovations have been done to this yacht to keep it in perfect condition and thus continue to offer a great service to those who seek quality and entertainment.

During these days you will have breakfast, lunch and dinner guaranteed, so you should not worry about this because here they have an extensive menu of dishes to delight your palate with the best African cuisine.

Now, what your accommodation will be like here is simple and here we will explain it to you. Here they have prepared for you private double or double cabins with a private bathroom and air conditioning. In addition, you will enjoy coffee, drinking water, filter and more.

You will also have access to the use of fishing and snorkeling equipment -it will depend on availability-. English speaking cruises and walking tours of Cousin Island, Curieuse and Aride. The island guards will guide your visit.

There is public transport nearby, it is not accessible for people who have a disability in a wheelchair and they will leave you at the point where they found you. 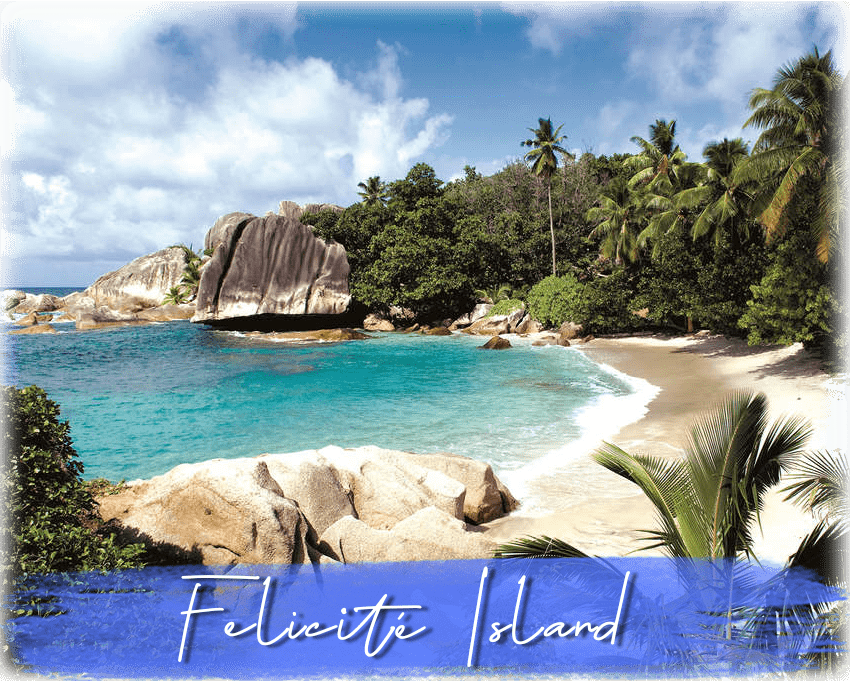 Users through social networks highlight that Felicité Island is a tropical paradise in which it stands out mostly for the number of fish that live there, some point out that sometimes the coral is dead but they still see the abundance of fish.

The tour lasts about 3 hours, you can swim and dive in different places, among which Coco stands out. Another positive point of this beach is the impressive view it offers to people who are looking for something different.

The waters here are shallow for this reason you will be able to appreciate the great variety of fish that stand out for their vibrant colors. The beach is also used for swimming and if you don’t know how, it will be a good time to learn.

Small mountains border the island, the green vegetation makes a wonderful contrast with the turquoise water, the white sand and many huge rocks that give the place a special touch and make it stand out from other places.

Many palm trees and sea turtles abound here, this being another characteristic point of the place since people swim here with the turtles and they become the central axis of the fun.

When planning night outings to get to know the best places on La Digue Island, to dance and have a drink, there is a great variety, the ideal is to put together an itinerary with these sites and visit the best ones to feel the nightlife. 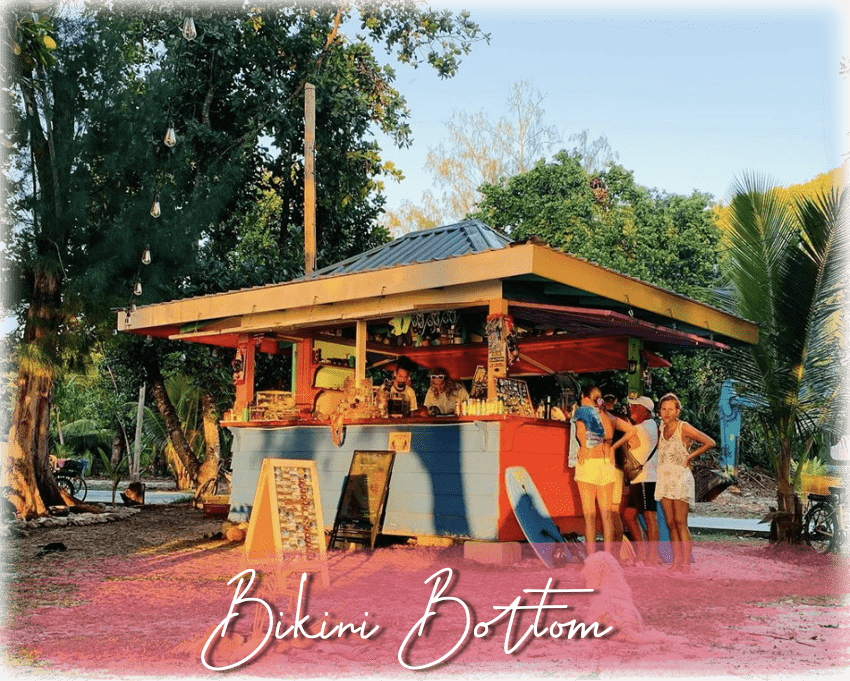 Bikini Botton stands out for being a place where smoothies stand out. Original drinks with good flavor, among these mango and coconut. Taking one here will be rewarding because a few meters away you have the beach and you will feel how the sea breaks on the shore.

Another of the attractions of this beach is that the turtles come here to enjoy the remains of food left in the place, some are fed and others are photographed with great interest.

Here there is also a wide variety of handicrafts for sale, you can buy bracelets and carved garments with messages alluding to this country to remember with great affection what your trip was, some are personalized.

Users also highlight that the beach is not very crowded, so you will have a good space to be calm and without so many people. The ingredients for the drinks are fresh and also highlight the attention of the staff that works here.

With turtles in the middle of the road you have to be very careful because this place is not crowded by cyclists. So if you rent one, feel free to move around and enjoy the scenery responsibly. 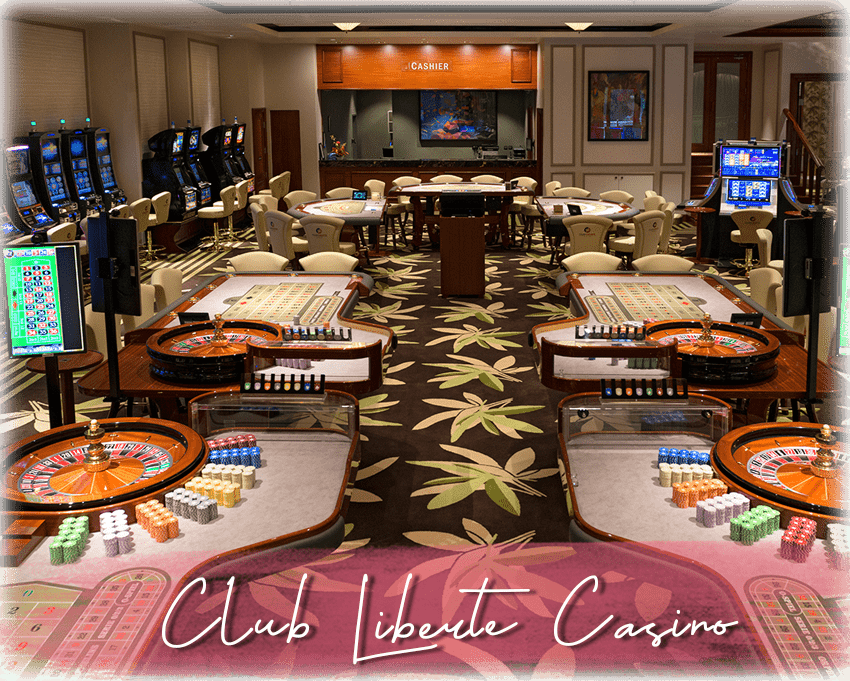 For lovers of games of chance, Club Liberté Casino is the ideal place to bet and win, but you’re in luck.

Slot machines, card games and roulette wheels will make you win or lose it all in a single moment.

In addition to ideal spaces to play, you can also sit in the restaurant area to enjoy a delicious meal.

Sushi, caviar and shrimp stand out among the most requested dishes, as well as drinks such as wine and rum.

Order a delicious cocktail while you enjoy this drink from the bar and watch how enthusiastically people bet everything to win.

Some people point out that this is the best casino in the country, highlighting its innovation, good service and professionalism.

Many define it as «efficient» when offering and serving customers.

The lights and sound are at the forefront, which is why many turn the place into their favorite entertainment center. Affordable costs, parking and Internet at your fingertips.

A series of islands that offer you the best fun and entertainment. Enjoy the best cuisine in Africa, savor exquisite drinks and cocktails specially prepared for you. Luxury hotels and beach clubs at the international forefront.

Transfers from one place to another, some meet you at the door of the hotel and take you to the place where you will do the tour. The beaches are splendid, full of warmth, color and people full of happiness.

Here you can also practice diving, enjoy a wide variety of fish, snorkel and ride a bike while spotting sea turtles. Spaces full of green vegetation and huge rocks to offer the best view.